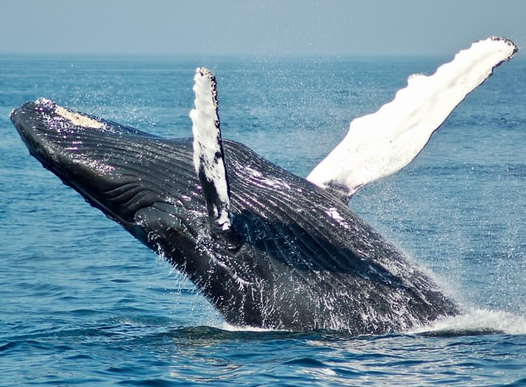 Historically, whales have been hunted for meat, bones and oil. But it was the rise of commercial whaling in the 1800s that pushed many whale species to the brink of extinction. By the mid-20th century, many of these majestic creatures were facing this plight.

Fast forward to 2021 and, thankfully, the numbers of whales are increasing, although they are still only a fraction of what they once were. This is largely thanks to Greenpeace’s iconic 1970s, Save the Whales, campaign, which helped push forward the global ban on commercial whaling in 1986.

Now scientists are putting whales forward as our secret weapon in the fight against climate change. Not many people know this, but whales can absorb up to 33,000kg of CO2 over their lives, whereas 1 tree absorbs up to 22kg a year.

As an added bonus, wherever whales go, phytoplankton grows, and this tiny sea creature absorbs around 40% of all CO2. That’s as much as 1.7 trillion trees or four Amazon rainforests. More whales mean more phytoplankton. So, restoring whale numbers could absorb a whopping 1.3 billion tonnes of CO2 every year.

And that’s not all. Off the coast of South Africa, these mighty mammals have been congregating in overwhelming groups of 20 to 200. Experts are absolutely stumped as to why these normally solitary creatures are gathering in such force.

Could the simple explanation be that the whales have had enough of climate change and us treating their homes as a dumping ground for so long? Could it be possible that they are coming together in protest to demand we stop climate change and save the ocean once and for all…?

Cream of the crop

How we get what we value